Korean Air, only a touch away with Android Phone 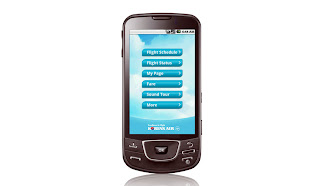 Services available through this application, like the iPhone, include flight status check, schedules and availability check, current reservation information, ticket fares and SKYPASS mileage records.
Plus, Korean Air has added a special menu that links directly to the Korean Air travel site (travel.koreanair.com). The site contains many useful travel information including Korean Air’s TV ad for Europe, “Listen to Eastern Europe”, which is a sound tour guide for famous Eastern Europe tour destinations. 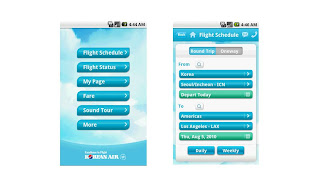 To enjoy this privileged service, customers can simply download the free application from the Android market. This application is available in multiple languages including Korean, English, Japanese, and Chinese for users all around the world.
With the increasing number of worldwide smartphone users, Korean Air will continuously upgrade its smartphone application services through supplementing additional functions such as seat reservations and pre-seat assigning to increase passenger’s comfort.

Korean Air’s iPhone Application which was launched in May 17 has been downloaded by more than 120,000 users worldwide.
Posted by Unknown at 11:59 PM