Thanks to the global economic recovery which spurred demand for both international passenger travel and cargo traffic, the airline posted an operating revenue of 2,836.4 billion KRW in the second quarter of 2010, a year-on-year increase of 36.7%, the highest second-quarter revenue in Korean Air’s history. International passenger and cargo businesses remained the major revenue contributors for the airline, accounting for 47% and 36% of the operating revenue respectively. Operating profit of the airline returned to the black from a loss of 127.3 billion KRW in the second quarter of 2009 to a surplus of 352.1 billion KRW during the reporting period. Profit margin was 12.4%, a significant year-on-year improvement and another historic record.

A continuous growth was seen in the passenger traffic since the second half of 2009 as a result of the rebound of the global economy. During the reporting period, passenger traffic recorded 14,646 million RPK, which marked the highest second-quarter traffic level in Korean Air’s history. 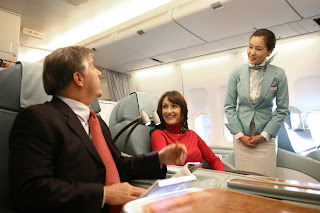 Revenue generated from this segment posted a year-on-year increase of 25.8% to 1,486 billion KRW. Rapid growth of leisure travel demand for short-haul routes such as China, Japan and Southeast Asian regions, together with the benefits brought by the visa waiver program for Korean passengers to the US regions, helped to boost international passenger revenue by over 25% in those regions. Among all international routes, China recorded the biggest growth of 50% in passenger revenue.
Cargo 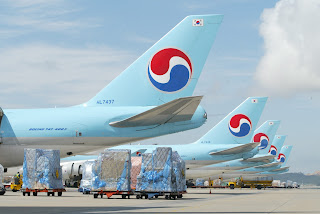 Attributable to the increasing exports of IT products (such as LCDs, semi-conductors and cell phones), cargo traffic reached 2,503 million FTK, up 26.2% year-on-year, the highest quarterly growth record for Korean Air. Cargo traffic to Europe more than doubled, and cargo traffic to the Americas and Japan nearly doubled during the reporting period. Revenue generated from this segment posted a year-on-year increase of 86.4% to 1,020.2 billion KRW.
Korean Air will continue to expand its business prudently while enhancing the quality of its service. With its long-standing commitment to achieving “Excellence in Flight”, Korean Air aims to provide the best quality to its customers while bringing the best returns to its shareholders.